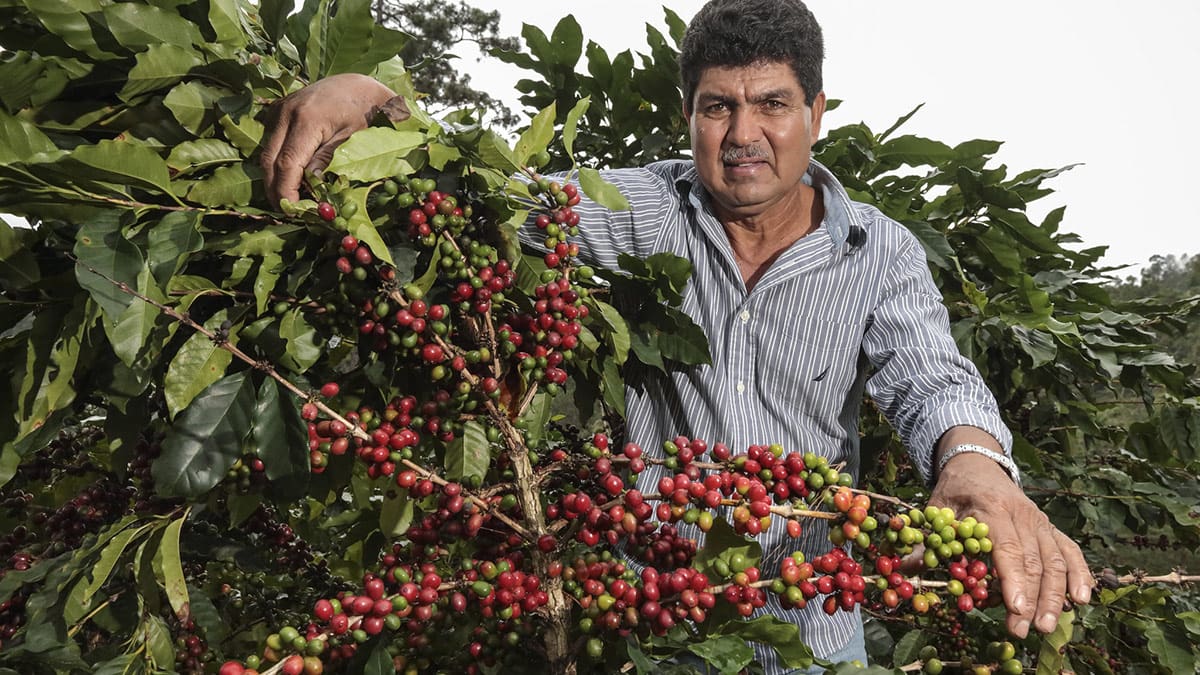 The most productive country in Central America when it comes to coffee production in Honduras. It also enjoys an excellent reputation worldwide, being appreciated for its Arabica beans, which include Bourbon, Typica, Pacas, and Catuai.

Throughout the world, Honduran coffee is known and appreciated thanks to its strong flavor as well as its quality. Both espresso and standard ground coffee are in demand. In the meantime, organic coffee from the Central American country is gaining importance. It not only stands for sustainability but is also advantageous for the farmers, as it brings them higher income.

In general, however, it is common practice in Honduras to work without chemicals during cultivation. Cooperatives, of which Cooperativa Cafetalera Capucas Limitada (COCAFAL) is one of the best known, make a positive contribution to further development. They help to reduce poverty in the country and generally provide better living conditions. Coffee is particularly important in Honduras, as it is the source of income for up to one-third of the total population.

A temperate tropical climate, high altitudes with nutrient-rich soils and sufficient rainfall ensure ideal conditions for cultivating high-quality Arabica. Robusta, meanwhile, plays hardly any role. In general, coffee from Honduras has the reputation of being very versatile – just like the country itself. In addition to chocolaty notes, nuances of caramel are not uncommon, and exotic fruits can sometimes be detected.

Honduran coffee trees were first cultivated around 1800. The region of origin is the Deperamento Olancho. For a long time, however, these plants played a subordinate role. The main focus was on bananas, which in some cases accounted for up to 88 percent of total exports. Much was done under the eye of large U.S. companies that had settled in the interior of the country. With their support, however, the infrastructure was also expanded. Coffee only gained importance in 1976, when the government withdrew the banana companies’ permission to use the port and agricultural land.

This was preceded by the Coffee War. From the 1950s onward, many farmers in neighboring El Salvador recognized the potential of Honduras for coffee cultivation. They increasingly settled in the high mountains, which went largely unnoticed by the government but enraged the locals all the more. As a result, the state reacted and began evicting them. In 1969, the conflict initially escalated into street battles before the Army of El Salvador fought for its peasants. The outnumbered Honduras was eventually joined by the U.S., prompting a retreat. Around 3,000 people fell victim to the coffee war.

But what became more than clear: Conditions in Honduras are perfect for cultivating coffee in large quantities. Many small farmers decided to establish plantations and profit from this industry in the future. By the early 1990s, coffee had become the country’s most important export. This boom was wiped out in 1998 by Hurricane Mitch, which destroyed large parts of the cultivated area. But just two years later, Honduras had largely recovered from this catastrophe. Today, the country regularly appears in the list of the world’s ten largest coffee producers.

The most common growing altitude for coffee in Honduras is between 1,000 and 1,500 meters, with the highest quality beans. However, altitudes of up to 2,000 meters are also common in some cases. This type is characterized by a strong aroma and a unique taste. It is called “high grow coffee”. The classification is also based on the altitude from which the beans originate. The next level is the “Standard” or “Prime”, where altitudes between 950 and 1,300 meters are mentioned. Meanwhile, the “Low Grown”, “Buen Lavado” or “Good Washed” comes from the lowest regions of 950 to 300 meters. Arabica is grown in Honduras in the varieties Catuai, Bourbon, Pacas and Typica. This is done without the use of chemicals and in a sustainable manner, in the shade of other trees.

The taste of coffee from Honduras differs due to the area of cultivation, roasting and preparation. It develops different aromas, from fruity to strong.

However, the most famous aroma of coffee from Honduras is the fruity-chocolate note.

Depending on the growing area, the coffee develops a different aroma. For example, plants that ripen more slowly because they are grown in cooler regions become somewhat sweeter than those grown on the coasts.

In addition, drying and wet or dry processing play a decisive role. Since the humid climate often does not allow sun drying, the beans are processed in a drying drum. The degree of roasting of the coffee bean also plays a decisive role in flavor. The longer it is roasted, the more intense the flavor.

Depending on which coffee flavor you prefer, you can choose depending on the region and, processing and roasting.

From harvest to sale – the journey of the Honduran coffee bean

From March to May, the main flowering of coffee plants continues in Honduras. Harvesting begins in October and can extend into the following March. Since the beans are a source of livelihood for many people, the anxiety is all the greater to ensure that the plants remain healthy and are not infected by coffee rust. Unfortunately, this fungus appears again and again and is also present in many other growing countries. After a real plague a few years ago, this problem has now gradually been put into perspective. As a result, coffee farmers in Honduras are increasingly turning to rust-resistant varieties.

Harvesting is done exclusively by hand, which is also due to the fact that the majority of plantations are run by small farmers. For them, using machines would not be financially viable anyway. Honduras practices mainly wet processing, although dry processing is also used in some cases. Drying is mainly done in the sun, less frequently in a drum dryer.

Manual sorting is common only for selected varieties, otherwise this step is done electronically. Despite the optimal conditions for coffee cultivation, the export is not structured in the appropriate professional level. Often, the harvests of many small farmers are simply mixed together. In general, however, there is a steady improvement in all areas. The beans are shipped from November to September, and there are many buying countries, ranging from Germany to the U.S. to South Korea.

Compared to a number of other countries, Honduras does not consume as much coffee. Nevertheless, it is a popular beverage here as well. Perhaps it just needs a few more decades to become more established. After all, the beans as an export product have only received their due appreciation very late, after bananas were in the foreground for a long time.

At the very least, it can also be clearly observed that consumption by the population in Honduras has steadily increased in the past. Another indication of this are the many coffee bars that are becoming more and more integrated into the image of many cities. They can be found in shopping malls, at gas stations, in hospitals and, of course, quite conventionally as cafés in busy streets. More and more young people can be found there. In a way, they are killing two birds with one stone: On the one hand, they are taking a short break to enjoy the wake-up drink. On the other hand, they can use the Internet, which is often available free of charge in the bars. Honduras is not only known for coffee enjoyment in the form of a hot drink – a typical trend is to refresh oneself with it well chilled as an iced coffee.

Flor del Café comes from the Marcala region. It grows in the border region not far from El Salvador at an altitude of 1,300 to 1,700 meters. Typically, this coffee is hand-picked and sun-dried. What many appreciate about this variety is that it contains fruity notes reminiscent of stone fruits such as apricots. In addition, there is a chocolate aroma with a subtle sweetness. Flor del Café is also characterized by a complex body and a full-bodied aroma. In addition to this variety, the beans from this region are known as gourmet coffees.

Another coffee variety that deserves a mention and is an insider tip for gourmets is Pacamara. This Arabica grows at an altitude of 1,200 to 1,500 meters and is considered very aromatic, soft and, to top it off, low in acidity. In 2006, this coffee received the award as the best from all of Honduras. The harvest is done by hand also the Pacamara is sun-dried.

There are three main coffee growing regions of importance in Honduras. The Copan region is located in the northwest, Montecillos-Marcala is found in the southwest, and Agalta is located in the center of the country. Marcala stands out as probably the best known of the three areas, which is actually popularly nicknamed “no man’s land.” The fertile soils have their origin in neighboring El Salvador. Indeed, volcanic debris was blown over from there.

Copan originated on the former territory of the Maya, who lived in this region in the 8th century. Today, highland coffee thrives here at an altitude of 1,100 to 1,300 meters, which gives it enough time to develop its aroma. This zone is characterized by warm temperatures during the day and cool nights. Nevertheless, fertile soils can be found here. Agalta belongs to the state of Olancho. This is where the country’s coffee history once began. The growing region is embedded in a rainforest area rich in flora and fauna. Mild temperatures and regular temperatures also favor the conditions for the plants here.