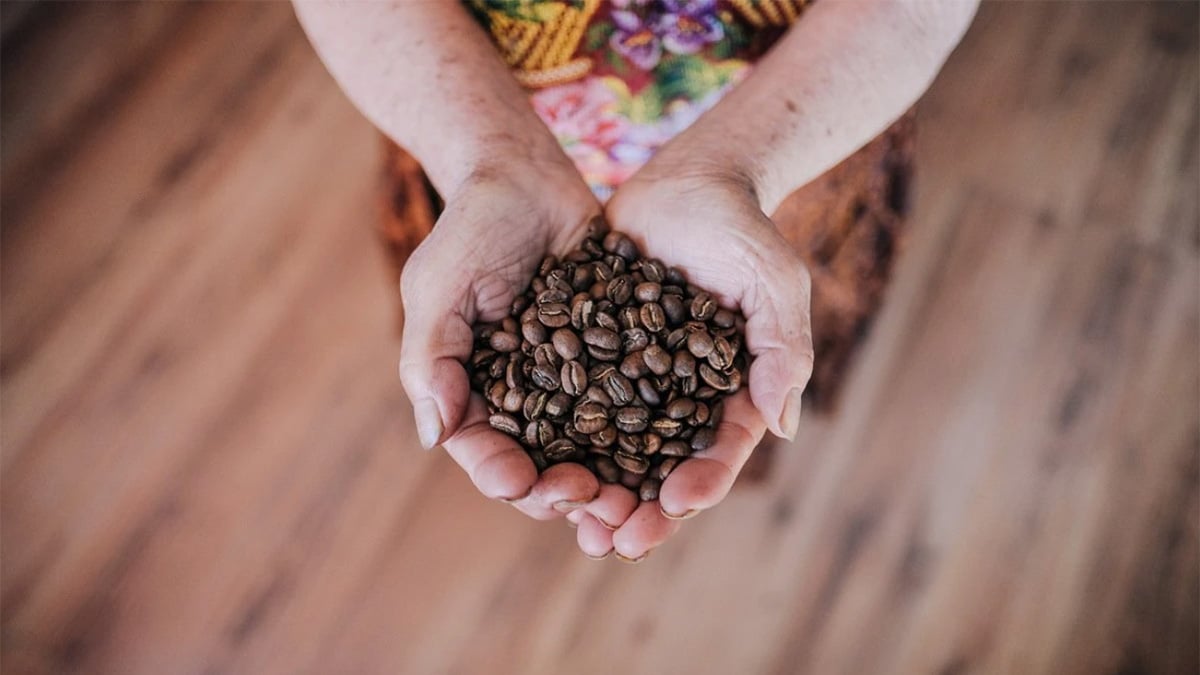 Guatemala Coffee is known primarily for Arabica beans of the Bourbon and Caturra varieties, with the coffee often thriving excellently due to volcanic soils. A balanced taste, which is paired with a unique character, characterizes the beans from the Central American country.

The soils, which are particularly rich in nutrients due to volcanic activity, are primarily what give Guatemalan coffee its distinctive character. Throughout the world, it enjoys the reputation of having a balanced taste, which is also rounded off by a graceful, spicy aroma. This is complemented by slightly smoky notes and a subtle acidity, which thus ensure a high recognition value. Not infrequently, a chocolaty note is also typical.

On the one hand, the coffee may seem savory, but on the other hand, it is still considered generally mild. Guatemala has different climatic zones, but the beans grow both in the mountains and in the lower plains. This in turn gives the coffee a sometimes very different taste, which shows its peculiarities depending on its origin. This is precisely what opens up a wide range of possible uses. Coffee from Guatemala is used, among other things, like filter coffee, for espresso or also in the form of roasted beans in fully automatic machines.

From today’s perspective, there is no precise indication of when coffee first arrived in Guatemala – at least it is impossible to say with any precision. However, it must have been around 1750 at the latest, which is quite an early date. The Jesuits were probably responsible for this. After several decades of cultivation, the Central American country concluded an agreement with the German cities of Hamburg, Lübeck and Bremen in 1847. This marked the birth of the first trade relations with what would later become the German Empire, which probably does not come to everyone’s mind first when thinking of cooperation of this kind. But by 1897, the Germans had acquired 170 coffee fincas in Guatemala and coffee cultivation was already a great success at that time.

This development suffered a damper, first by the First World War, later by National Socialism. Guatemala also had problems: In the interior, for example, the descendants of the Maya were forced to work on coffee plantations. Then, in the middle of the 20th century, the long-lasting civil war raged, causing great destruction and, in some cases, the disappearance of entire swaths of land. It is therefore almost a miracle that the coffee-growing areas were only affected to a limited extent. Today, Guatemala has left this partly dark past behind and profits from coffee to a decisive degree. Along with tourism and the textile industry, the beans are now one of the most important economic sectors.

Guatemala focuses almost exclusively on the cultivation of Arabica beans, with the Caturra and Bourbon varieties taking center stage. Due to the partly still active volcanoes, the country benefits from a very nutrient-rich, fertile soil. It provides the perfect foundation for the plants. And if we are talking about optimal conditions, then the climate should not be forgotten. Here, quite hot days alternate with cool nights. This gives Guatemalan coffee its fine spiciness and typically mild acidity. In the southwest, where rather flat landscapes are to be found, Robusta also grows to a small extent, which basically requires less care.

January to March is the main flowering period for coffee. The beans are harvested from August to April, almost exclusively by hand. This takes more time than if the whole process were done with mechanical assistance. On the other hand, it gives the workers the opportunity to pick only the really ripe cherries, leaving some time for the rest. Another positive side effect is the high quality of the coffee.

For the subsequent step, the process of wet processing has become established in Guatemala. Meanwhile, drying can be done in two different ways: either with the help of a drum dryer or in the sun. Sorting can also be done in two ways – often by hand, but electronic support has also become an option. In many places, small farmers are grouped together in cooperatives, which can earn a higher price for their work, which they earn through organic cultivation and consistently high coffee quality. Incidentally, about a quarter of the population lives from this sector of the economy.

The subsequent shipping of the beans takes place from two important ports. From Acajutla it goes to the Pacific, while Santo Tomas de Castilla is the first way to the Pacific. Guatemala’s main target markets include Germany, the United States, Japan, Belgium, as well as France, Italy and the Netherlands.

For many centuries, coffee has been interwoven with Guatemala’s history, and accordingly, over that time, the population has also developed an intense attachment to this important economic commodity. The beans are important to the inhabitants simply because about a quarter of the people earn their living in this sector. That is why coffee is one of the most popular beverages. It is fair to say that many people cannot go a day without the black beverage.

The importance of coffee for Guatemala is shown by the fact that it is the subject of an annual festival. It takes place in the city of Freihanes in February. The focus is on the coffee itself, of course, but there is also local food and traditional music. One of the highlights is a parade in which the inhabitants parade through the streets in typical Guatemalan clothing.

The most renowned coffee region in Guatemala is Antigua and one of the most sought-after beans in the world comes from here. It is the El Pulcal, which benefits from the typical conditions of the region and this can be seen in the quality. The three volcanoes of the growing area provide the fertile soil, while the altitude and the regularly recurring rainfall do their part. El Pulcal coffee grows at altitudes of up to 2,000 meters in the shade of other trees, so it is not exposed to direct sunlight, which also benefits optimal development. In terms of taste, it brings together notes of caramel, milk chocolate as well as floral aromas.

From Antigua, as well as from Coban and the lesser-known cultivation region of Atitlan, come coffee beans with the “Strictly Hard Beans” (SHB) rating, which is the best possible quality grade that comes from altitudes of 1,500 meters and above.

The most popular coffee regions from Guatemala

The most renowned growing region of Guatemala is without a doubt Antigua. There are numerous reasons for this, as the area is situated between three volcanoes, which accordingly provide perfect soil conditions. In addition, there are mild average temperatures, regular rainfall and constant humidity.

San Marcos, in turn, is located in one of the most diverse regions of the country. From beaches to volcanoes over 4,000 meters high, almost everything is represented. A lot of rain and an average temperature of 21 degrees Celsius are the reasons why the coffee harvest can be started here before any other region. A contrast to this is Huehuetenango with a rather low amount of precipitation, but basically high humidity. The subtropical climate helps the coffee cherries to ripen uniformly. Acatenango got its name because of the volcano of the same name, although the area is not far from Antigua. Thanks to the warm Pacific air, the plants thrive in excellent conditions even at 2,000 meters above sea level.

What is special about coffee from Guatemala?

Coffee from Guatemala is one of the best, highest quality and most unique coffees in the world. The special, spicy-smoky aroma comes from the cultivation on volcanic soil, which is very rich in nutrients.
In addition, the coffee from Guatemala creates something that only the fewest coffees manage: It is on the one hand full-bodied and strong in taste, but on the other hand very mild and digestible. In Guatemala, mainly common Arabica beans are grown.
However, these have unusual aromas – from chocolaty to fruity to herbaceous notes, everything is there. The best known coffee growing areas in Guatemala are Antigua, Huehuetenango, Atitlan and Lampocoy.

Coffee from Guatemala is generally considered a strong, full-bodied coffee that is nevertheless mild and digestible. In addition, all beans from Guatemala have a rather spicy and smoky aroma.
However, the individual varieties differ noticeably in their flavors depending on the growing region. This is due to the different soil conditions, which vary from volcanic soil to clayey soil.
Some coffees have a natural sweetness and caramel or chocolate notes. Others taste more floral, herbaceous or fruity. A note of citrus fruit can also be found in some coffees from Guatemala.
Apart from the growing region and the aroma of the coffee bean, the subsequent type and duration of roasting plays a role in the taste of the finished coffee.

Where and how is coffee grown in Guatemala?

Guatemala is a classic coffee-growing country and has a long tradition of coffee cultivation. A good 270,000 hectares of the country are used for this purpose.
The coffee plants are grown on fertile and nutrient-rich soil, for which the partly still active volcanoes of the country are responsible.
Since Guatemala has different climatic zones and coffee is grown in both high and low altitudes, many different flavors and aromas are created.
Most of the growing areas are in the southwest of the country, where the highlands have the perfect climate for growing Arabica coffee plants. The climate is very changeable – it is very hot during the day and cools down considerably at night.
But it is precisely this that gives the beans their unmistakable aroma in the end. In a few low-lying areas, Robusta beans are also grown in Guatemala.
The main harvest time for coffee in Guatemala is between August and April and the coffee cherries are mainly picked by hand.
This has the advantage that really only the fully ripe coffee cherries are picked and the not quite ripe cherries can ripen further and are harvested later. This is not the case with machine processing – all the cherries are simply harvested.
Accordingly, harvesting by hand has a very positive effect on the quality of the product. After the coffee cherries have been wet-processed and then dried, they are packed and shipped to various countries around the world.